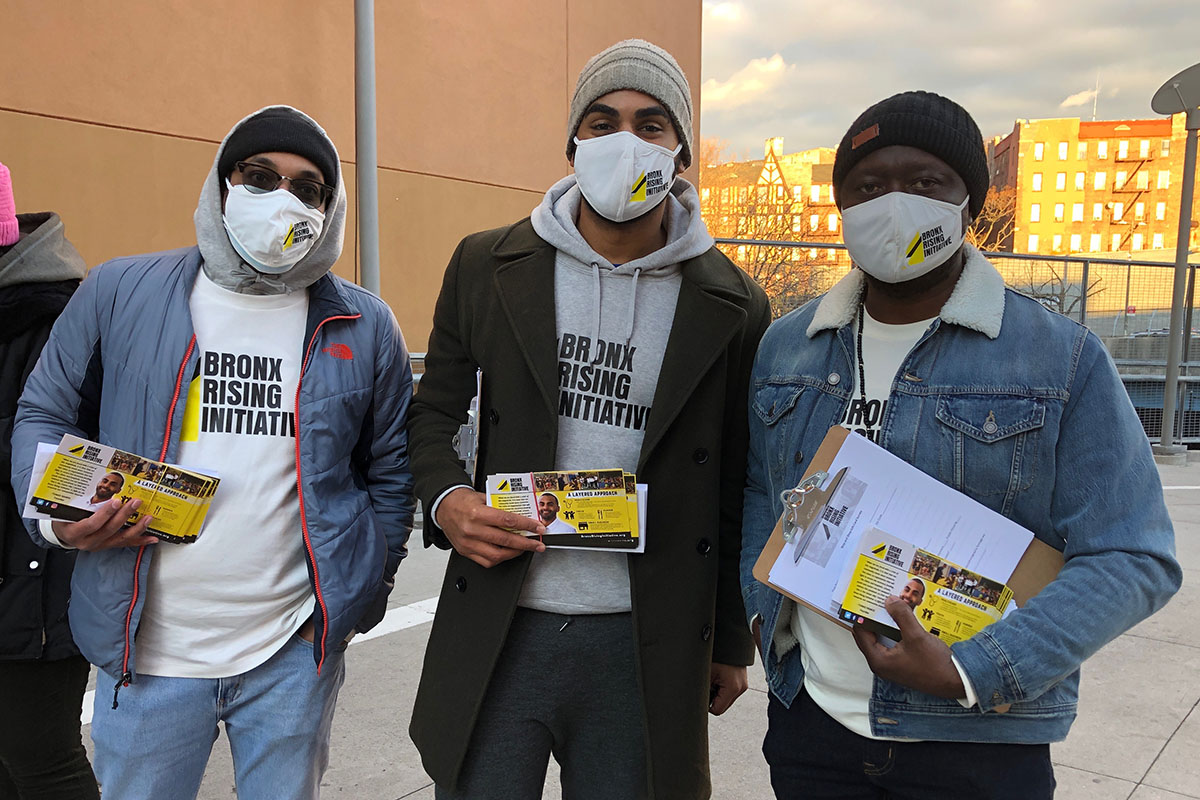 The Bronx Rising Initiative (BRI) was founded by community activist and organizer Tomas Ramos and powered by the Oyate Group, a nonprofit organization with the mission to alleviate poverty by creating sustainable and holistic solutions that empower underserved communities in the Bronx. The initiative works to create access to healthcare, alleviate hunger, invest in the growth of small businesses, and inspire youth to better themselves and their borough.

Tomas Ramos is the founder and president of the Oyate Group’s Bronx Rising Initiative. He is committed to finding sustainable solutions to the challenges they face.

Drawing on his wealth of government and nonprofit experience, he aims to create sustainable programming and provide access to critical resources to his home borough of The Bronx.

He has a passion for community engagement and hopes to continue positively engaging youth and inspiring the Bronx community through filmmaking.

Prior to joining BRI, Lymarie worked at ACDP, a nonprofit organization in the Bronx where she served as a Program Director at Murphy Community Center. 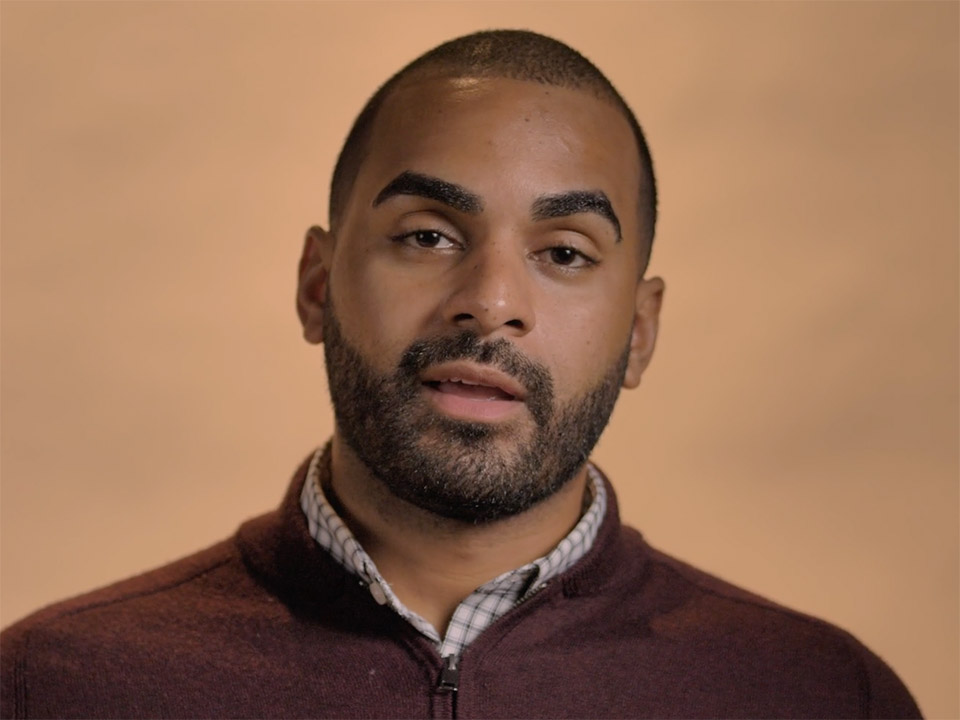 Tomas Ramos is the founder and president of the Oyate Group’s Bronx Rising Initiative, an organization dedicated to providing and distributing critical resources across the Bronx in response to the COVID-19 pandemic’s disproportionate impact on the borough. Driven by his belief that residents of the community he loves deserve to not just survive but to thrive, he is committed to finding sustainable solutions to the challenges they face.

At the onset of the COVID-19 pandemic, Tomas temporarily suspended his campaign for New York’s 15th congressional district to support New York’s hardest-hit borough by launching the Bronx Rising Initiative. Beginning by raising funds to increase ICU bed capacity and provide PPE for local hospitals, he has since expanded his efforts to include fighting hunger, uplifting local youth, supporting small businesses and more. Tomas’s successful approach has been covered in numerous local, national and international news outlets including The New York Times.

Prior to founding BRI, Tomas began his community organizing career as the Program Director for Children’s Arts and Science Workshops at the Bronx River Community Center, bringing with him a background in youth education and hospitality. While working in the community center, Tomas fought to secure funding for the first technology center in New York City public housing and secured numerous awards and grants for local community centers and families living in low-income housing.

​He also worked to develop financial literacy, civic engagement, and college and job readiness programming for residents; planned and organized a conference to empower young men and boys of color, focusing on the negative impact of toxic masculinity; and was appointed to New York State’s My Brother’s Keeper planning committee, which resulted in the creation of a Young Men’s Initiative mentoring program at the Bronx River Community Center.

He has also worked with restorative justice agencies to facilitate a diversion program that enables low-level offenders to avoid the legal system and provides them with needed support, and he was a pioneer plaintiff of NYC’s Fair Chance Act, being one of the first individuals to sue a large corporation for discrimination.

A first-generation Dominican American, Tomas was born in the Washington Heights neighborhood of New York City. In the late 1980s while his father was incarcerated, Tomas and his mother relocated to Pennsylvania due to the effects of the crack cocaine epidemic and the war on drugs on his neighborhood. Upon his father’s release, the family moved to the Dominican Republic, where his parents remain to this day. Tomas later returned to the United States with his siblings and went on to finish high school and graduate from Temple University, where his passion for progressive ideas and social justice deepened.

Jason Autar is the Chief Operating Officer at the Oyate Group’s Bronx Rising Initiative. Drawing on his wealth of government and nonprofit experience, he aims to create sustainable programming and provide access to critical resources that will positively impact his home borough of The Bronx.

Prior to joining BRI, Jason worked at CASES (Center for Alternative Incarceration and Employment Services), where he served as a court representative in Brooklyn and worked to provide young defendants with an alternative to incarceration – offering him a deeper understanding of the dire effects of mass incarceration on Black and brown communities. After several years at CASES, Jason moved to Goodwill Industries of Greater NY & Northern NJ, where he managed a job readiness program for young adults with special needs by partnering with employers and other social services agencies.

He then went on to the NYC Department of Youth and Community Development where he worked closely with nonprofit organizations serving New York City Housing Authority communities and supported initiatives that fostered sustainable partnerships with residents, community stakeholders, governmental organizations and grassroots community institutions.

Jason was born in the Berbice region of Guyana. His father immigrated to the United States in the early 80’s and then sponsored Jason and his mother in the late 80’s. Jason’s family was complete after his siblings joined him and his parents in the early 90’s. His family eventually settled in the Tremont section of The Bronx.

Jason holds a BA in Forensic Psychology from John Jay College of Criminal Justice where he was heavily involved in on-campus groups, rallies and more, which led to his commitment to social justice. 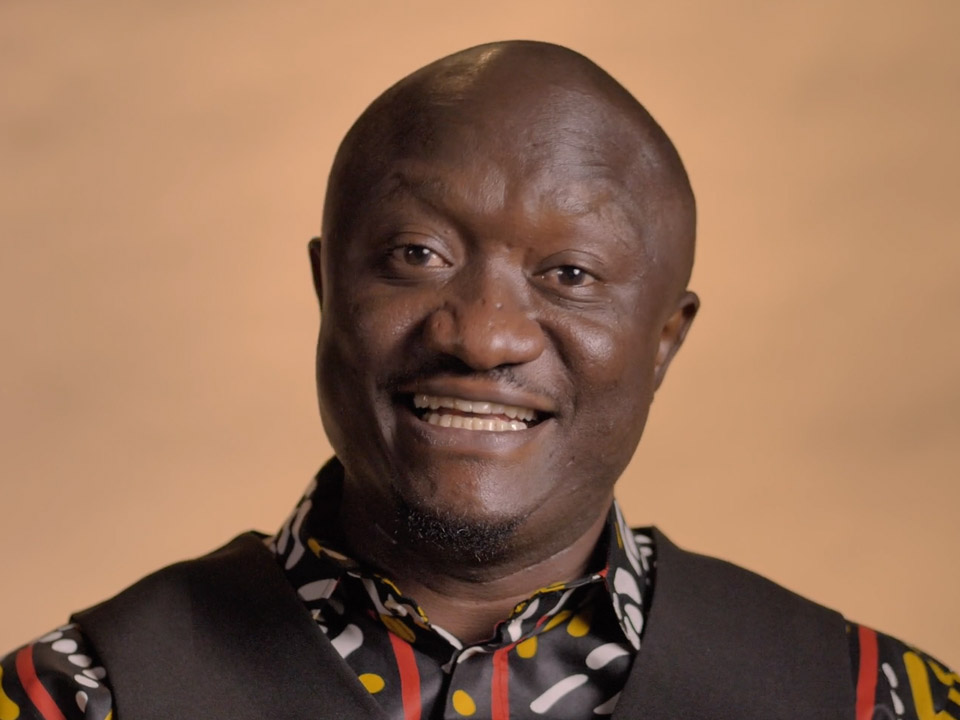 Cyrille Njikeng works as a Managing Director at the Oyate Group’s Bronx Rising Initiative. He has a passion for community engagement and hopes to continue positively engaging youth and inspiring the Bronx community through filmmaking.

Cyrille is the founder of the nonprofit organization My Sister Cares Foundation, with which he travels to orphanages throughout Africa donating computers, toys, school supplies, and clothes to children in need in memory of his late sister, Sheila. He has also worked as a Director of Photography on several film project such as the web series “Boughetto” (2014); directed the documentary “The Water I Shall Give Them” (2013) and “The Rebirth” (2018); produced the award-winning short film, “Miles the Movie” (2019); and acted in the second season of the
Netflix series “Master of None” (2017).

Cyrille emigrated to the United States from Cameroon in 2007. He holds an Art in Communications and Media Arts associate degree from Westchester Community College where he enrolled as an adult learner. His journey continued through CUNY Lehman College, where he graduated with a Bachelor of Art in Multimedia and TV Studies and went on to serve as the executive director of the CUNY University Student Senate. He currently holds a master’s degree in Film from the City College of New York and is actively pursuing a Doctorate in Organizational Leadership. 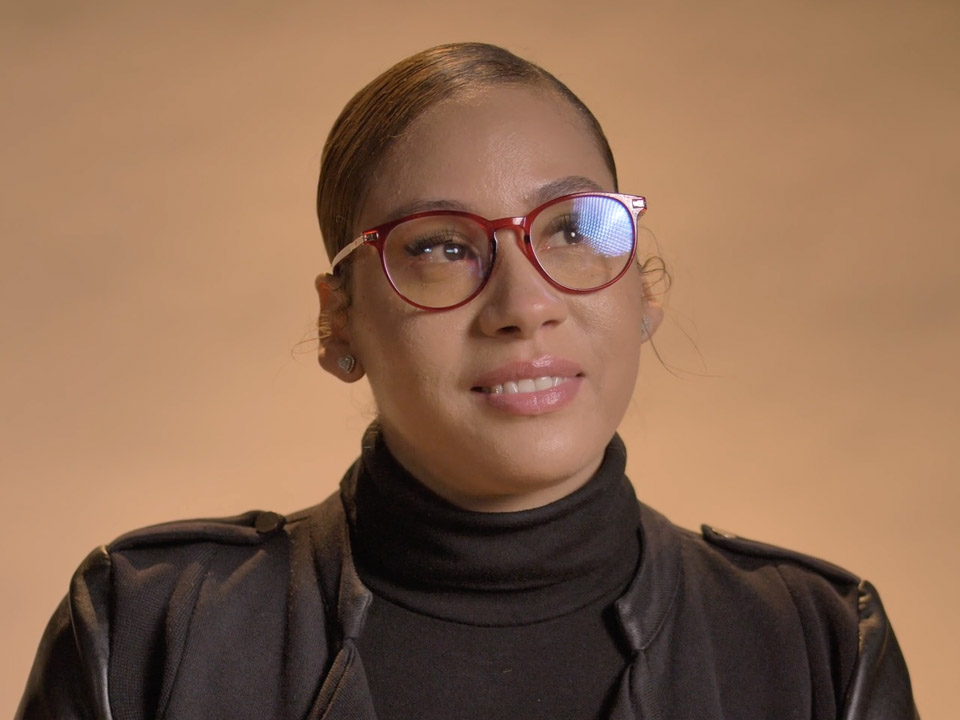 Prior to joining BRI, Lymarie worked at ACDP (Community Association of Progressive Dominicans), a nonprofit organization in the Bronx where she served as a Program Director at Murphy Community Center. During her time here Lymarie fused her background in hospitality with youth and community development. As Program Director, Lymarie fought to provide youth and families living in low-income housing with increased access to resources by creating programming that centered around financial literacy, civic engagement, social emotional learning and college and job readiness. She continued to address gaps in services by addressing health care inequities by partnering with community health institutions such as DOHMH and health partners which ultimately led to increasing health care access for the communities that she served. Prior to her work as a Program Director, Lymarie served in various roles at ACDP, such as Assistant Program Director, Office Manager and Youth Group Leader.

Lymarie was born in New York City and grew up in the Washington Heights neighborhood of Manhattan where her parents settled in the early 80s after immigrating to the United States. She is a dedicated mother and wife – her family consists of her brilliant one-year-old son, two amazing stepsons and a supportive husband.

Lymarie is pursuing a BA in Human Services from New Hampshire University – her expected date of graduation is 2023.

Almost everyone we speak with has lost someone they love to COVID-19. We often hear that getting the vaccine is in their honor. New York is always strong – but we are healing. 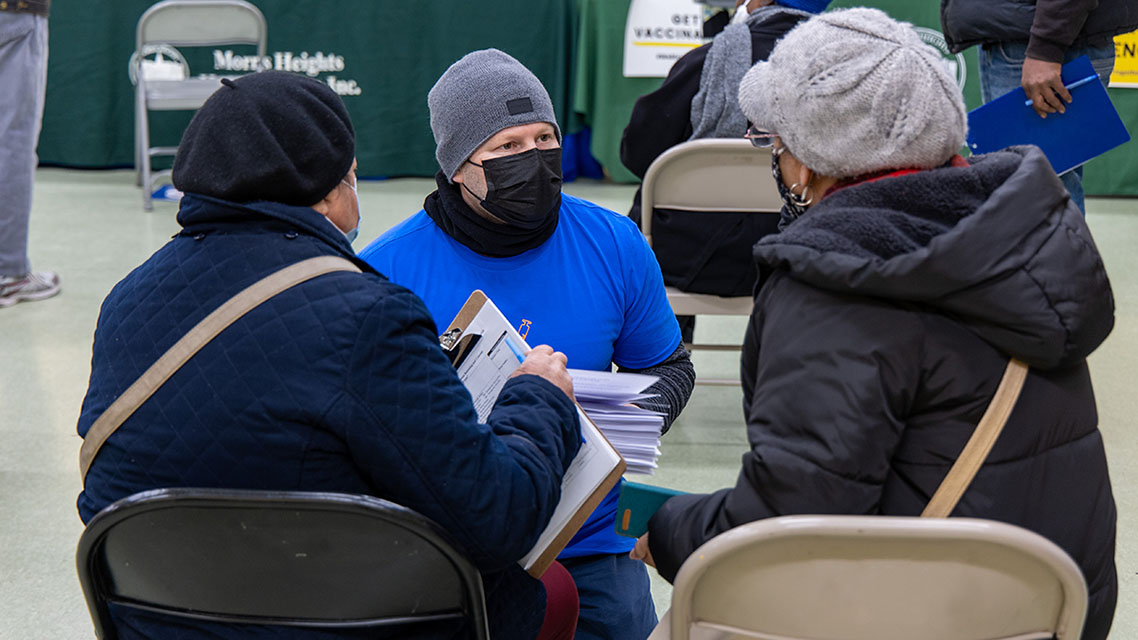 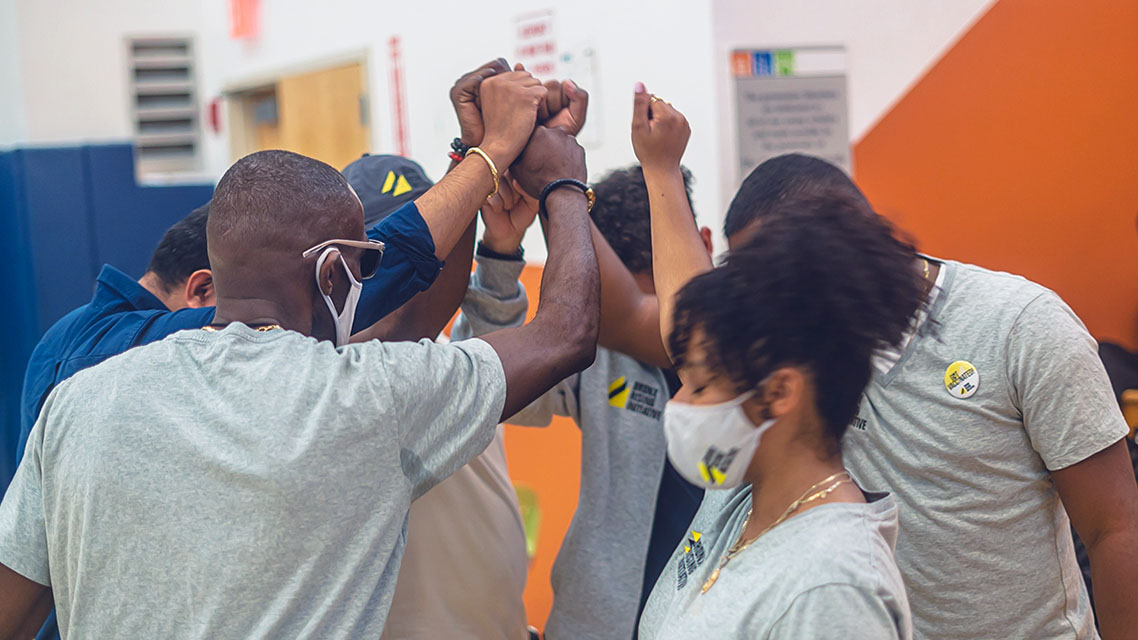 We were able to distribute over 500 turkeys to Bronx families in time for Thanksgiving. This wouldn’t be possible without all the incredible volunteers that help keep organizations like ours THRIVING.

Oyate Group’s Rising Initiatives are dedicated to providing and distributing critical resources across NYC in response to the COVID-19 pandemic’s disproportionate impact on marginalized New Yorkers.

©2022 by The Bronx Rising Initiative.

We love to share the important work that we are doing throughout The Bronx. Join our newsletter and keep up to date on the latest Bronx Rising Initiative news and information!